You remember the barber shop photo from Wednesday: 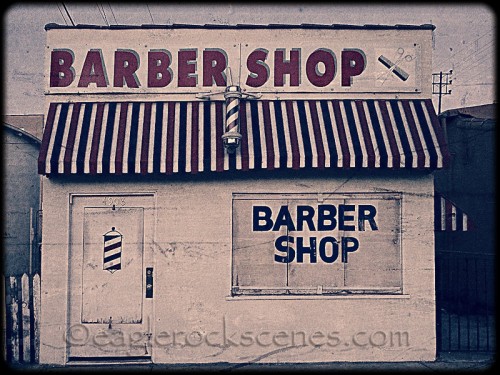 I added a simple aging effect, which I’ll get into shortly, but I needed to do a few things to the photo beforehand to really allow the effect to be, well, effective. Here is the original, unedited photo, taken at dusk on Monday evening: 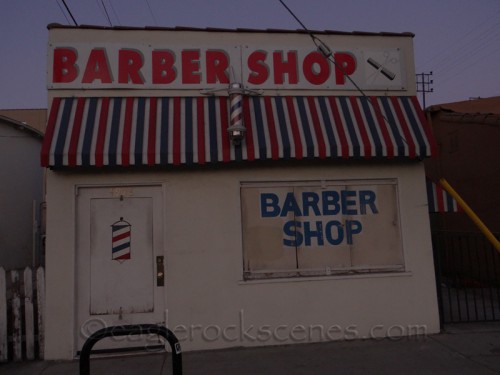 This was totally taken on the fly and there were certain things I couldn’t do to get a better photo. I wanted to take it from farther back, but I would have had to step out onto a busy street during rush hour. Then, there was the bike rack and distracting electrical wire on the right. And since I was trying to be quick — I’d been taking other shots and was headed back to my car — I didn’t even take the time to fix the exposure, so it was dark on top of everything else. Was this photo even worth pulling off the card? Of course it was! 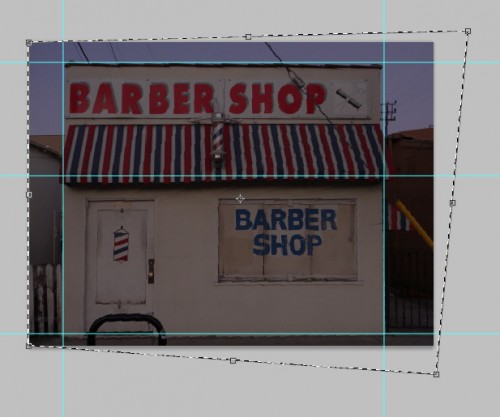 Here is a trick I use more often than I let on: with the help of some guides and Edit->Transform->Skew, I fixed the perspective so the building no longer looked warped. More often, I do this to reduce perspective if I don’t want it to be a noticeable element in the photo. But I also do it, as in this case, to fix the look of a building when I am forced to shoot from an angle that makes it look out of whack. I also use Transform->Distort to add height if the Skew is stretching the image too much horizontally.

Then I did the usual fixes with Curves to brighten the shot.

Getting rid of the bike rack and electrical wire took the longest. For thicker items, like the bar of the bike rack, I use the Quick Selection tool to pick it out, then go to Edit->Fill and choose Content Aware, as you see here. That usually gets rid of most of the item. 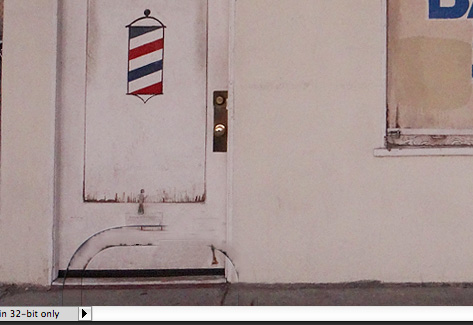 But not all of it. I tidy it up with the Spot Healing Brush tool, drawing over the fine lines like you see above, or if that doesn’t work effectively, I use the Clone Stamp tool, which gives me more control. The electrical wires can usually be erased with the Spot Healing Brush and Clone Stamp tools, but I had to do some fixing around the “O” and “P” of Shop. I had to use shapes and the Clone Stamp and luckily the sign was hand-painted so I did not need to get it 100% perfect. 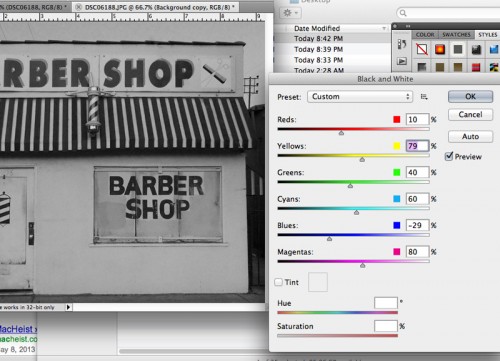 Now that all that was out of the way, I could get down to making the photo look vintage. I made a duplicate layer of the photo. Everyone has their own way of doing that; mine is to go to the Layer Panel and drag the layer down to the “Create a new layer” icon (it’s the one to the left of the Trash Can). Then I took the new layer and turned it into black and white by going to Image->Adjustments->Black & White. I use this instead of the other grayscale tools because I can manipulate the look by dialing up or down the different colors. I can darken the gray of a sky by darkening the Blues, or lighten pavement by dialing up Yellows. There is a lot of creativity and fun to be had here. 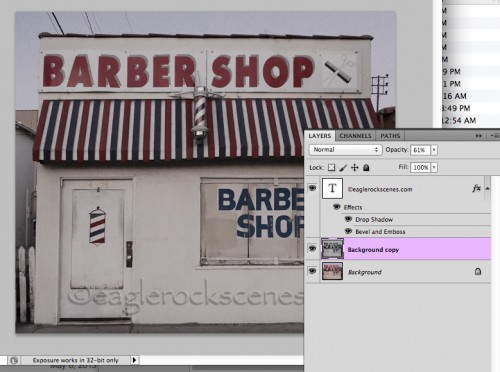 Once I am done with that, I go to the Layers Panel and reduce the opacity of the black and white layer until I have a nice, faded-looking effect. This is where you can really see the difference it makes when you manipulate the colors in Black & White. 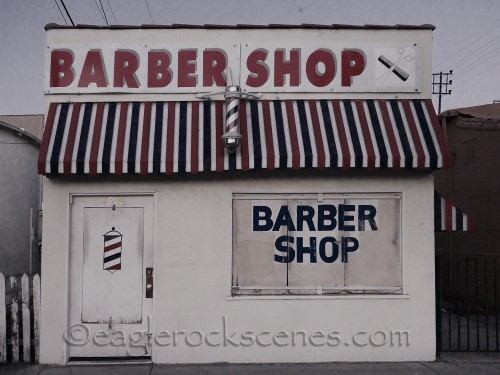 As you can see, this is a pretty nice effect on its own, but I wanted to take it a step further, so I used what I consider my “secret trick,” which really isn’t all that secret. It’s OnOne Software’s Perfect Photo Suite. It’s a software suite that isn’t cheap, but it isn’t all that pricey either (especially if you are already invested in Photoshop, or Adobe Creative Suite like me). Part of the suite is Perfect Effects, which includes hundreds of effects you can add to your photograph, in different combinations and manipulations. But I had just one effect in mind — it is part of the Vintage effects and it’s called Dirty Bird, which mimics printing from a dirty negative. I simply added it on top of the photo, at 100% strength and it added the final touch, which you see at the top of this post.

The secret to using a tool like Perfect Effects is that your photo needs to be ready for it. If I had added the Dirty Bird filter on top of the original photo, it would have just looked like a bad Instagram pic. Instead, I did a lot of manipulation to the original image because I wanted the effect to be icing, not the whole cake.